I was reading The Jesus Storybook Bible to my little Ruby the other day and in between several readings of the “one about the sick girl” we also managed to read one about Jesus feeding the five thousand. Jesus instructed the disciples to feed the crowd of people who had been listening to Him talk. When they started discussing what they could offer such a crowd, one boy produced his lunch of five loaves and two fish: 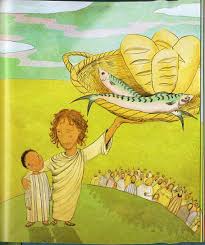 Jesus’ friends laughed when they saw his little lunch. “That’s not nearly enough!” they said.

But they were wrong. Jesus knew it didn’t matter how much the little boy had. God would make it enough, more than enough.

“How in the world will Jesus feed everyone with just that?” Jesus’ friends said, because they thought it was impossible.

What a well-timed reminder that story was!  I have so little to offer to God. In fact, I have nothing to offer Him. He’s infinite and I’m finite. He’s holy and I’m a sinner. He’s strong and I’m weak. Anything and everything that I am or do or have is only by His grace to start with!

But it doesn’t matter how how weak or stupid or inadequate I feel. God has called me to serve Him. He could have made me a super-woman if He wanted to, but He didn’t. So I just need to offer myself to Him and trust Him with the results. He takes my five loaves and two fish (all courtesy of His grace) and then He makes it enough — more than enough.

That way He gets the glory.

(Illustration taken from The Jesus Bible Storybook, by Sally Lloyd-Jones, illustrated by Jago.)

The Jesus Bible Storybook is a charming Bible story book that continually points to Christ, God’s grace, and the story of redemption, while refraining from the moralizing that is often present in children’s Bible storybooks. It does, however, take some liberties (such as portraying Jesus winking to the boy who gave him his loaves and fishes, which Jesus certainly could have done, but the inspired account does not include this detail).

The author does an excellent job of making the biblical accounts exciting and accessible to young children. My granddaughters love it. But, like most Bible storybooks written to reach little ones, it does need some qualifying along the way. When you read any Bible storybook with your children, remember that it is not inspired Scripture. Don’t let storybooks displace the reading of actual Scripture with your children. Instead, let it lead you back to Scripture. Weigh its accounts against God’s Word as you read and discuss its content with your little ones.

We hope to offer a review on this and other Bible storybooks in the future.